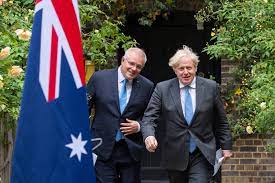 Britain and Australia have agreed on a free trade deal that would eliminate tariffs on a wide range of goods.
The deal is coming as the U.K. seeks to expand links around the world following its exit from the European Union (EU).
The pact is expected to boost exports of traditional British products such as Scotch whisky, while boosting imports of lamb and wine from Australia.
Britain will also reduce barriers to trade in financial and other services.
The U.K. hopes the deal will help it join the trans-Pacific trade partnership, which would open the door to increased trade throughout the Asia-Pacific region.